Mac2SFM is an utility allowing to reinstall on a NTFS server running SFM (Services for Macintosh) Macintosh files received in so-called containers (Binhex, MacBinary, AppleSingle and AppleDouble files).
It happens frequently that one gets Macintosh files through different channels like email, network, Internet or more simply FAT data media and whishes to reinstall those files on a NTFS/SFM server to allow Macintosh workstations on the network to access those files under good conditions.
In the case of data files, things are relatively easy if the file integrity was not compromised. is preserved. the only problem is then to allow the Macintosh workstations to recognize the nature of the data files. This is another aspect of the file exhcnages between both platforms.
In the case of fonts, programs or other files whose resource fork is not empty, the operation becomes more difficult or even impossible (even if the resource fork was not damaged or lost in the transfer operations or in the transmission channels).

Presentation of the Program

Mac2SFM is an utility to convert Macintosh container files to multistream files used by NTFS/SFM servers to manage the file forks and the metadata of Macintosh files (this explains why the program can only work on such a disk).
Here is a snapshot of the program: 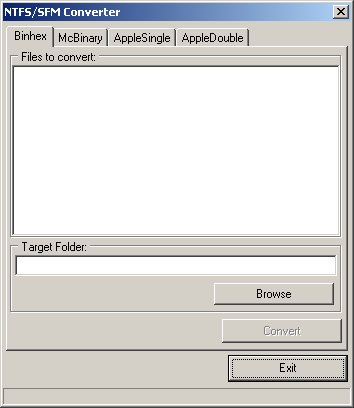 Mac2SFM displays four tabs, corresponding to the four container formats which it supports.
Each tab displays a list, on which you can drag-and-drop files from Windows Explorer. Below, you select the target folder (on a NTFS drive).
Last, a button launches the conversion process.

If you happen to get Macintosh files as AppleDouble files, and want to include them in an image produced by MacImage without loosing the resource fork. The support for such files is not yet included in MacImage. Mac2SFM can help you to produce (on a NTFS volume) a SFM container. Just copy the files to a NTFS volume, drag-and-drop the file to the AppleDouble tab and launch the conversion after choosing the target folder. Include the resulting files in the project under MacImage. This container is automatically recognized as such by MacImage, which puts both forks where they belong.

Mac2SFM is included in the MacDisk package. You can also download it freely from our Downloading Section.

Mac2SFM is a relatively new tool, which was coded in order to solve internal problems for which we couldn't find any solution on the Internet. It was built using several code modules existing in some other programs.
Nevertheless, we welcome comments and reports on your user experience, on lacking features, etc.